The history of truffles is full of mystery, hysteria and lore, with anecdotal evidence of many edible and medicinal varieties and their use going back thousands of years. In classical times the water from truffles was used as a cure for diseases of the eyes and skin. During those times the truffle was harvested by both pigs and dogs in relative abundance from the natural forests and deserts. It was regarded primarily as peasant food, with some types such as the Terfez Truffle having no taste at all. The Romans used it to carry the flavor of their heavily spiced foods and it was not until the 14th century when the aristocrats began to procure and use large amounts of Truffles that it began its heady elevation to its current status in the culinary world. During the Renaissance, truffles regained their popularity and were honored at the court of King Francis I of France. Truffle mania was at its height in the Parisian Markets in the 1780’S and by the 1825 it is stated that they were found only on the tables of the nobles and kept women. Perhaps this is when they received their nefarious reputation as an aphrodisiac, confirmed later by their forbiddance of nuns in Spain by the church. Certainly, elevating this mysterious tuber’s value, interest and status in the culinary world.

Although the 19th century was the European “golden age of truffles”, with their establishment at the core of haute cuisine, black winter truffle production has collapsed in Europe since that time. France now produces perhaps only 10% of the 1,000 tonnes that was produced annually before World War 1. And wild truffle production continues to fall across France and Spain, exacerbated more recently by climate change pressures. The once traditional mixed use of native forests – some grazing, some light timber harvesting and truffle hunting – has ceased, as rural villages in Spain and France have been abandoned as people moved to the cities or larger regional centers. So the forests have become dense thickets where truffles can no longer flourish. 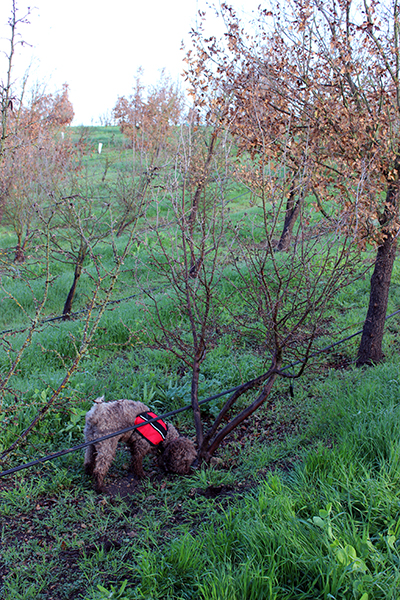 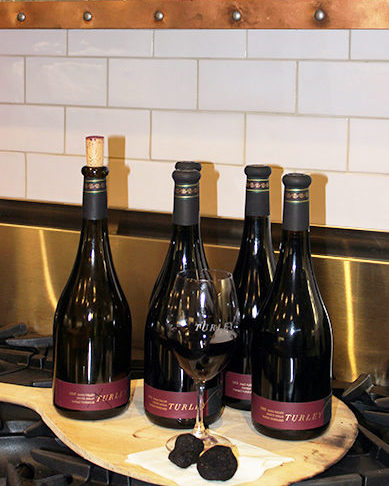 Truffle farming in the U.S.

Truffle farming in the U.S. is still considered by many to be experimental science however with the advent of technology and the ability to cultivate the symbiosis between truffle spores and tree roots it is quickly becoming an economic agricultural phenomena. Estimates suggest that there are as many as 300 Truffiere’s (Truffle Orchards) in the U.S. alone. Although a young industry, projected returns on investment are higher than those of any other known “legal” crop. It is no surprise that many wineries throughout California are diversifying their crops both economically and biologically as they plant Truffle Tree’s next to their cabernet grapes. Other countries have already recognized this economic opportunity and are successfully promoting their truffle industries.

Truffles have for centuries thrived in the same Mediterranean climatic conditions as wine grapes and their requirements for success are not unlike other crops. However unlike seeds or saplings verifying that the truffle trees are inoculated with the correct species of truffle is paramount, this with the correct climate, soil management, irrigation, weed and pest control the keys to success. With scientific, technological and farming advances the reality of truffle farming and production in the U.S. can be realized. We at Tesoro Mio are excited to be on the fore front of this gastronomic agricultural phenomena. We welcome the opportunity to share our experiences with those interested in participating in Truffle Farming in the U.S. If you are interested in finding out more about reliable nursery stock providers, farming management, consultants and other truffle growing related resources please contact us for greater details.

For centuries and still today dogs are critical to harvesting truffles. Until such time that scientific advancement invents a pheromone sniffing machine, (word is they are working on one in Silicon Valley) dogs will continue to be the best resource for effectively finding mature ripe truffle in both orchards and the wild. Unfortunately there aren’t enough trained truffle-hunting dogs to meet demand, so the supply of dog-harvested wild truffles remains low in the Pacific Northwest. The harvesting season of PNW domestic truffles overlaps the proposed harvesting season of cultivated Perigords and Burgundy’s in California which further strains the availability of professional dog teams for harvesting and detection in local California Truffle Orchards

The Italian Truffle Dog is a small to medium-sized dog, well proportioned, powerfully built, of a rustic appearance, with a dense, curly coat of woolly texture. The dog should give the impression that he has the strength and endurance to work all day in difficult and challenging terrain. AKC Lagotto Romagnolo

Truffles are a type of underground mushroom that grow on the roots of specific host tree species. They are ectomycorrhizal in that they form a symbiotic relationship between the tree roots and the fruiting body or truffle. There are hundreds of species of truffles, but only a handful are of culinary significance and are highly prized by top chefs and connoisseurs around the world for their exquisite flavor, and command exceedingly high prices. The other natives and lesser known truffles are growing in interest as the demand for truffles continues to outweigh the supply. 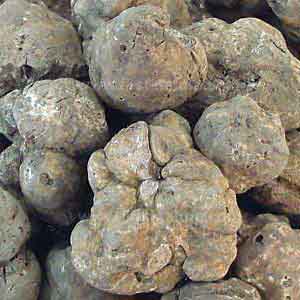 Winter White, Pico or Alba White Truffle. Grows wild in Europe and has yet to be successfully cultivated for commercial production. Harvested September through December. The White Diamond of the Kitchen it is the most expensive of Truffles fetching prices in excess of $2,000/lb 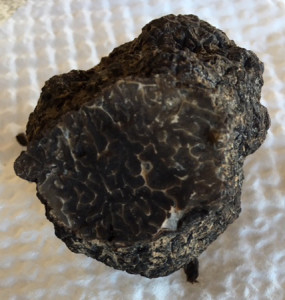 Perigord, Winter Black Truffle- The most economically valuable of colonized Truffle species. Successful cultivation in all continents except Antartica. It is estimated that over 95% of all T. Melanosporum are cultivated vs wild. Harvest takes place from mid November to April in the Northern Hemisphere and May-September in the Southern Hemisphere. 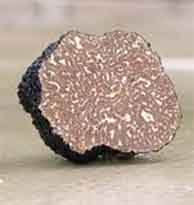 Burgundy (French)Truffle, Summer Black (aestivum) and Autumn Black (Aestivum var. uncinatum) is a Black Truffle. Has been successfully cultivated in both Europe and North America. The Summer Truffle harvested in April-May with a lower price per pound and the Autumn harvested September- November has a darker flesh (gleba) 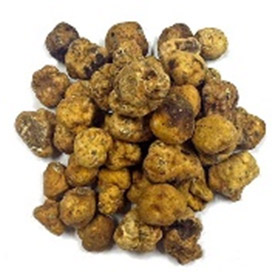 One of the more famous wild Italian truffles was first cultivated in Italy in 1990. It is often substituted for the Alba white truffle as a less expensive version with a slightly garlicky bite. It is harvested early January through March. Bianchetto is light to reddish brown with irregular brown patches. Inside, the truffle becomes tawny to dark brown, interlaced with a network of white veins. 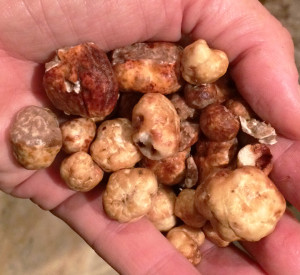 Found in Northern California to Northern Washington. Fully mature it is reddish brown with a brown with white marbled interior. Highly prized domestic edible with “truffly” savory odor with subtle notes of garlic, cheese and nuttiness. 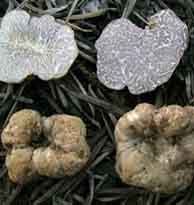 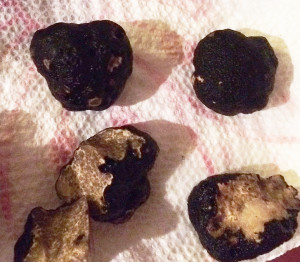